Although the risk of malignancy transmission has been understood and reported since the first years of clinical transplantation, the use of organs from donors with known malignancy or with a high risk of malignancy has largely been avoided by current screening practices.

There have been no reports of the transmission of malignancies through transfusion of blood components. Historical estimates of cancer frequency in potential or actual donors range from less than 1% to almost 3%. However the actual frequency of donors with malignant tumors is not known with precision since it is often only through failures and unusual circumstances that transmissions have been reported. Limited information on such risks leads to a standardized approach for consideration of individual situations, based on a number of principles, as follows:
- Strength of Diagnosis: A diagnosis of cancer or history of cancer in the donor may be definite (known histologic type and stage), incomplete (definite cancer of indeterminate type) or probable/possible (diagnosis reported by a third party or uncertainty regarding cancer in history).
- Biological behaviour of the tumour: The characteristics of the expected biological behaviour and prognosis of the specific cancer in the normal population.
a) A cancer of a histologic type and/or stage that has a reasonable likelihood to metastasise in the normal population should be a contra-indication to donation.
b) Exceptions are made in some cases to permit donation from donors based on: a) a history of malignancy with low likelihood of recurrence: b) cancers that do not metastasise in normal population e.g. basal cell carcinoma of skin, small well differentiated thyroid cancer, c) some central nervous system (CNS) malignancies that almost never extend beyond the blood-brain barrier (BBB) and in which iatrogenic compromise of the BBB has not occurred, and d) some tumors such as small, solitary well-differentiated renal cell carcinomas that can be resected prior to transplant.
- Tumour therapy performed / current follow-up: Consideration for donation can be made in cases of specific cancers where the diagnostic evidence is explicit, but documented curative treatment and disease-free intervals are such that the risk of metastasis in the normal population is minimal or absent. Specific cancers that may behave differently in immunosuppressed populations are excluded even if they meet this criterion e.g. melanoma, Kaposi’s sarcoma. Other tumours with known possibility of recurrence after extended disease-free periods, e.g., breast or colorectal cancer, also do not fit into this category.
- A literature review was performed in NOTIFY to summarise current knowledge on risks of malignancy transmission through the transfer of MPHO and was intended to determine if the principles outlined above do or do not provide a continuing basis for assessing the transmission risk for malignant disease. This information was mainly derived from dedicated follow-up registries, particularly in the field of organ transplantation e.g. the Australian and New Zealand Dialysis and Transplant Registry, the Centro Nazionale Trapianti Tumour Registry, the Danish Tumour Registry, the Israel Penn International Transplant Tumor Registry, the Organización Nacional de Trasplantes Tumour Registry, and the United Network for Organ Sharing Registry. The review of the published information (mainly case reports and single center series) also intended to serve for outlining the clinical manifestations of transmitted malignancies and providing guidance on how to determine the likelihood of malignancy transmission. As a result of the aforementioned literature review, a list of reported MPHO transmitted malignancies is provided in Table 7.
Table 7. List of malignancies for which at least one report on transmission through the transfer of MPHO has been identified 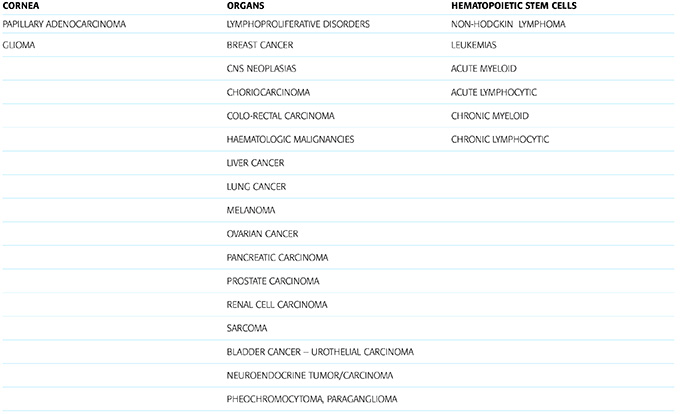 ‹ 15 HARM TO RECIPIENTS - MALIGNANCY up 15.2 PROVIDING GUIDANCE ON EARLY DETECTION AND PREVENTION OF TRANSMISSION ›